Fossil-fuelled human societies have radically transformed the contents and chemistry of the Earth’s surface and atmosphere, some far more than others. Right now, all organisms face the impact of changes in climate which will inevitably amplify and complicate with time, procrastination and the protection of narrow interests.

Duriana Climate Delegation is an art exhibition to provoke imaginations curated by Other Asias. It explores the daring science and diplomacy of the People’s Republic of Duriana through its participation in this winter’s UN Climate Summit in Peru.  Having negotiated decolonisation, Duriana’s approach deals with awkward matters of race, knowledge politics and history too readily jettisoned for a fundable position at the negotiating table.  Its socially and ecologically unifying welfare principles and actions push back against the supremacist structures* which continue to weaken (non)humans, whilst making new forms of climatic violence possible.

Making a break in their journey to Peru, the Climate Summit Delegation, led by President Captain Izzet BangBang, technologist Pradip Yogiki and granddaughter-of-the-nation Ping Delima Puteri, will stop off in London. Here they will hold a rally for their local supporters and a press conference, to launch a subversive poster campaign targeting Most Depraved Carbon Emitters, and a Decolonial Delegation Pack for all the family.

The delegates’ very own news agency, The Nature-Culture Times (NCT), will be reporting on their conference shenanigans for the duration of the proceedings

Artists, architects, geographers, writers, performers, educators, scientists and all concerned are invited to participate in this project and get in touch with The Secretariat in the first instance over email on durianaclimatedelegation@gmail.com or through @DurianaClimate on Twitter.

-------
Other Asias is nominated for an Al Hamra Award for the Excellence in the Arts - the results will be announced on 25th March 2013
at a special awards ceremony with Muslim News
-------
Construction Gallery
Private View: Thursday 8 March 2012
7pm to 9pm
74 - 80 Upper Tooting Road, London SW17 7PB
Gallery open: 12 noon - 7 pm, Wednesday to Sunday
www.constructiongallery.co.uk
Helena Wee, Other Asias Associate Artist, at Construction Gallery

A sound piece Strings (2005) by Helena Wee is inspired by the unseen patterns in the everyday rhythms, structures and movement of our lives. Strings deconstructs the Prelude to Bach's Cello Suite No.1 by randomly swapping blocks of frequencies within the piece using Fast Fourier Transform. “Maybe all we are is a collection of tiny vibrating strings of energy. Elegant symphonies of randomness and chaos, each movement varying in tone and colour".

Helena Wee is an Other Asias Associate Artist whose work appeared in Current 1:InFormation and A Cup of Tea Solves Everything. She is also part of the Other Asias Zine Circle and made the Chang - E Starchart

OtherAsias Co-director Hamja Ahsan in currently involved in Construction Gallery Project Space in Tooting, from January to March 2012. Hamja was born, grew up & lives in Tooting. His event: 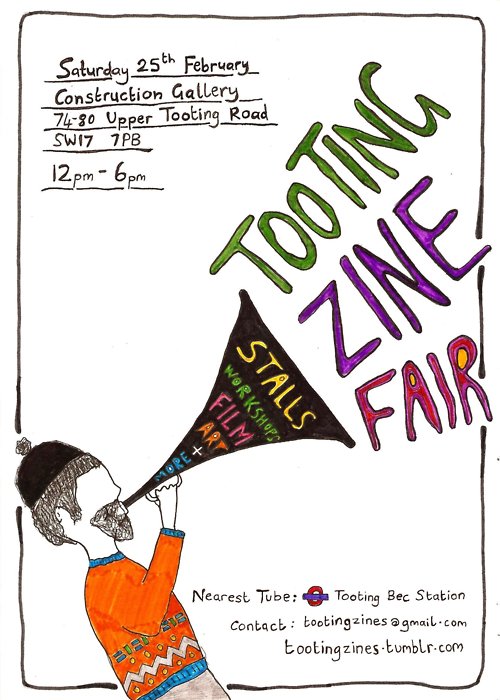 The Construction Gallery ( constructiongallery.co.uk ) will be hosting the Tooting’s 1st Zine Fair on Saturday 25th February 2012!  Zines, artists books, illustrators, comics and critical writing will be exhibited from locally-based artists and all around the world including Pakistan, Russia, Siberia, Egypt and China. The day long event will include workshops, exhibitions, animation & video art screenings.

Background:
The Zine Fair was initiated by two Tooting-based artists Hamja Ahsan and Sowfia Niazi.
Ahsan and Niazi have been active in the current revivial of interest in Zine culture, participating in recent Zine Fairs across the UK. The two wanted to bring Zine subculture to to address the lack of arts events in the local area, as part of the team running the Construction gallery.

Hamja Ahsan, of Bangladeshi origin, runs a transnational artists collective called Other Asias, who will feature in the event. Sowfia Niazi, of Pakistani origin, recently published a zine on Hijabs and featured in Micah gallery’s Britpak exhibition and the Artistic Jihad touring exhibition. She is part of the Walrus Zines collective.

The event is part of Tooting Tales literary event held in Brick Box at Tooting Market.

Hamja will be delivering a talk and screening at Castlefield Gallery in Manchester in 2012. More details to follow.

Webnode, an innovative sitebuilder
Have a captivating website for free!
Get started