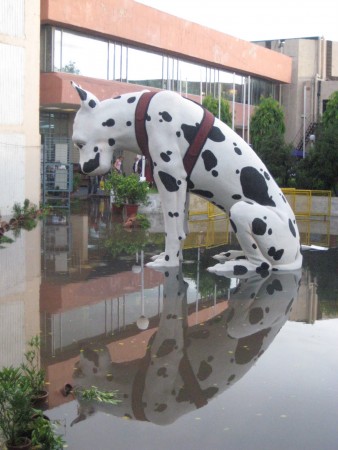 For any piece of writing that covers a social event it is expedient first, to ask the question ‘who is speaking here?’ A particularly important question to aim at an art fair, for among its many facets an art fair is essentially a social (or a sociological) event:

“Who is speaking here?”

Namely there are whisperings between gallerists as to the effect of speakers at the talk forum mentioning their artists on a panel, (“Mr Obrist talked about one of my guys and those two cricket celebrities came straight over!”); there are words spoken through framed smiles as visitors pose for their photographs in front of the Anish Kapoors; there are stern tones from security guards funnelling the flows of footfall; there are the dialogues of ‘curated walks’ from local art and curatorial students; there are the words fed into microphones from academics, artists, critics and gallerists at the talks forum; the multi-lingual tones of speculators and brokers into their blackberries, (“confidence is certainly rising… between 30-50% general drop since last year’s auctions… this is worldwide”), and lastly those words and words of dissent from all those who just love to hate the fairground.

It was a good fair though. There was good work, and some really bad work too. Galleries came from all over the world and so said the local press, many were successful. The Kapoors were among the highest priced. Subodh Gupta was there too. Hans Ulrich elbowed me in the ribs without apologising, (I don’t think he noticed). Geeta Kapur spoke wonderfully at the forum. So did French philosopher Thierry de Duve; standouts in the over-packed talks programme. Bangalore’s Gallery SKE was a favourite stand. Devi Art Foundation and Asia Art Archive produced a participatory zone under the name, ‘What is Your Dream Museum’; it was a mess of colour and paper and merrymaking at the fair.

On the second day Delhi was lashed with an apocalyptic thunderstorm. Rain, thunder, wind, and a flood all the way down the road: the fairgoers up to their knees in it.

In the sculpture park Ved Gupta’s Dog Democracy – a largescale fibreglass dog with an aesthetic somewhere between Pop and a not-so-poppy children’s cartoon – was to be found staring at its own reflection in the eventually-stilled Monsoon waters that now surrounded it. An absurd and wise looking Narcissus smiling down at its own reflection in the muddy waters, its head no longer bowed in obedience but in private and independent reverie. That scene said it all perhaps.

Navel gazing: loads of it.

Waiting: for a Monsoon.

Waiting: for a fortune.

Another way of looking?  “Let’s just see what next year brings.”